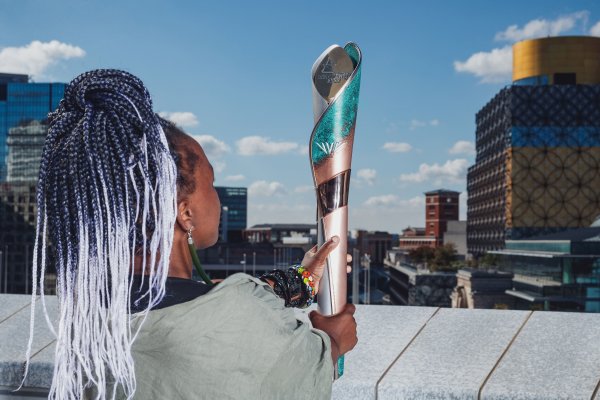 The Baton has been specially created by designers and technologists from the West Midlands in a unique collaboration that fuses science, technology, engineering and art.

The shape of the Baton moves away from the traditional shape seen in previous editions of The Queen's Baton. With Birmingham 2022 making history by being the first major multi-sport event to award more medals to women than men, the strength and fortitude of women across the Commonwealth is celebrated throughout the design of the Baton.

Ideas behind the design

A mechanised chamber beneath the brass leaf plaque holds a message from The Queen, to be read out at the Birmingham 2022 opening ceremony.

Fitted with a 360-degree camera, the Baton has 'eyes', and a 'brain' which record and transmit imagery and digital information, allowing stories from Commonwealth communities to be told.

Elements of the Baton have been cast in Birmingham's Jewellery Quarter using accessible metals of copper, aluminium and bass.

Lining the length of the curved shape and woven throughout the Baton is a platinum strand, paying homage to Her Majesty Queen Elizabeth II, in her Platinum Jubilee year.

The Baton features LED lighting and a heartrate sensor that display the heartbeats of Batonbearers. The lighting also changes when two people grip the Baton during handover.

The Baton also has 'lungs', consisting of atmospheric sensors with laser technology that analyses the environmental conditions wherever it is in the world.