Blaby & Harborough Jump to the top! 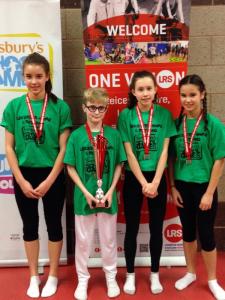 Teams from Market Bosworth High School; Winstanley and Bosworth Academy competed in this Key Steps 3 trampolining competition. Despite being very nervous of being asked to perform in front of judges; staff and parents the students involved performed well in both their set skills and set routines. With both individual and team honours up for grabs students knew that they were competing against pupils from other schools and their team mates. Scores proved to be very tight with students missing out on top places by only 0.05 marks. Louise MacCardle proved victorious in the individual KS4 competition; whilst Market Bosworth 1 were victorious in the KS3 team competition pushing Winstanley into silver medal place by less than 1 mark. Bosworth Academy will put their competition experience to good use when they compete at Ashby in a second competition before going on to compete at the School Games Championships in March in the KS4 comp.