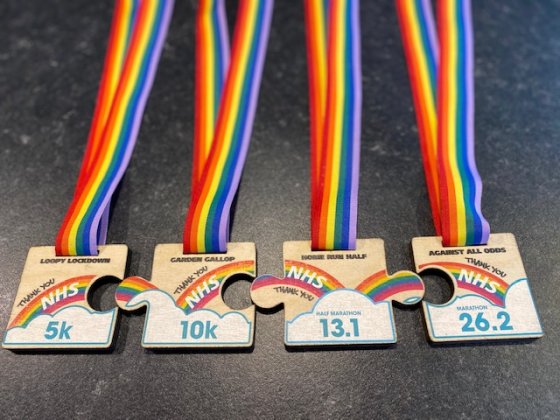 Although we were still allowed outside for exercise once a day, it soon became obvious that lots of people had to use this allowance to walk their dog or take their kids out, and so were unable to go running as they used too.

Also there seemed to be lots of people who didn't want to actually go out unless they had to (even for exercise) or those that are shielded and vulnerable that were choosing not to go out. Inspired by the people in other countries doing balcony half marathons etc, Julie Raftery had the idea to do a home run challenge, first in 3 parts, but then at the request of a friend they added a 4th (shorter) distance. The plan was to obviously raise money for the NHS, but also to give people a focus, a goal, a reason to get up and keep exercising, and maybe come out of this whole thing with a great memory and sense of achievement.

The idea is that you do all your running in your own property, whether that's your garden, driveway, house, flat (or for some, their private car park at the business they own), the rules are; this is not your once a day outside exercise, it is stay at home exercise. You complete as much or as little as you want at a time, and add all your mileage together to reach your target distance, you can then add another target and keep going. For example, you could run 1km in a day. Do that 5times and you get the 5K medal. Do it another 5 times and you get the 10K medal and so on. All 4 medals work as individual medals, but they also form a jigsaw making one big medal!

Julie discussed the idea with her friend Andy Buck, but knew she didn't have the time to make it happen due to work being so busy. Andy posted the idea on his own running club's fb page (hermitage harriers) asking if anyone would like to help make this happen, and the response was amazing! Suddenly they had a whole team working together and the offer of free online entries!

The response they have had to the challenge has been brilliant and so much fun to watch everyone posting their stories and progress. They get some lovely messages and emails from people saying how it has given them a goal (especially for the kids who are really smashing it!) and that they are all really really enjoying it!! They have had everything from 0.5km at a time to marathons in a day, canicross people doing it with dog training laps (run to heel and sit and stay), fancy dress superheroes and running rabbits, torchlight night running, gardens, driveways, alleyways, kids as young as 5 have been completing marathons! It's all just blown everyone away!

Julie has got up to 17miles in total now, and is really enjoying it……she admits she doesn't even like a race that has 2 laps!! Julie is not sure what it is that makes it so satisfying, maybe it's the fact that it's crazy and we would never have even thought of such a thing a few months ago, or maybe it is still making progress and keeping fit in the face of adversity, I really don't know, but it really is brilliant!

Please take a look at the photos and the Facebook page. They still have capacity for more entries and would love to raise some more money. Each medal only costs £1.21 each and the only other cost is a stamp to post them, so almost all of the money is going to charity.