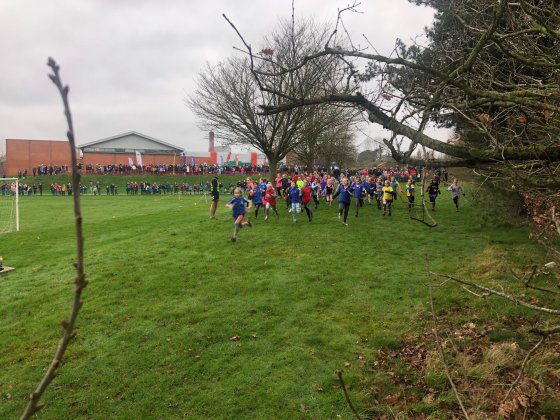 The cold and windy conditions didn't stop over 340 students from giving it their all in the first HBSSPAN Primary Cross Country Meet of the season. Whilst there was plenty of competitive spirit there was also a tremendous amount of sportsmanship and teamwork on show, alongside the extremely vocal support of hundreds of parents from the sidelines it was a fantastic morning of Cross Country running.

The first race of the day was the Year 3 Boys. Excitement was high at the start line and the pace was electric from start to finish. A huge well done to our top three finishers: Will M (Desford), Jacob K (Sketchley Hill) and Ewan M (Congerstone).

The Year 3 Girls were next and with over 50 runners it was going to be a tough race. However, Grace C (Desford) came out on top with a superb run, closely followed by Jasmeen S (Stafford Leys) in second and Jessica P (St Peters Earl Shilton) in third.

Next up were the Year 4 Boys, and again with a field of over 50 runners it was a magnificent performance from Ewan H (Mercenfeld) to take first place. Christopher W and Finlay S (both from Sketchley Hill) came second and third respectively.

The Year 4 Girls was equally as close a race with the lead changing throughout. However, Isla K (Burbage Juniors) crossed the finish line in first place. Hannah J (St Margarets) was second and Florence T (Desford) came in a very impressive third.

The Year 5 Boys had a fantastic team performance from Desford, with 5 of the top 7 runners coming from there. Harrison C (Manorfield) won on the day closely followed by Charlie H (Mercenfeld) and Dan C (Desford).

The Year 5 Girls also had a brilliant team performance with Amelie T, Katherine B and Sienna M coming first, second and third all from Sketchley Hill!

The Year 6 Boys had been waiting for a while for their race but that didn't stop them from setting a blistering pace, almost catching the hares! Luke J (Hinckley Parks) came first with a great run, closely followed by William K (Sketchley Hill) and Charlie R (Richmond).

The final race of the morning was the Year 6 Girls and it didn't disappoint! Sophia W (Desford) sprinted across the finish line in first place, Jasmine J (Newbold Verdon) was in second and Lois D (Battling Brook) came in third place.

A huge thank you to all the school staff who helped on the day alongside the Masser Family who helped organise and run the event. Without the help of these wonderful volunteers we wouldn't be able to host such a competition!

We look forward to seeing you all for Meet 2 on February 8th!