Volleyball England dribble and flick their way to victory at the Workplace Hockey Competition! 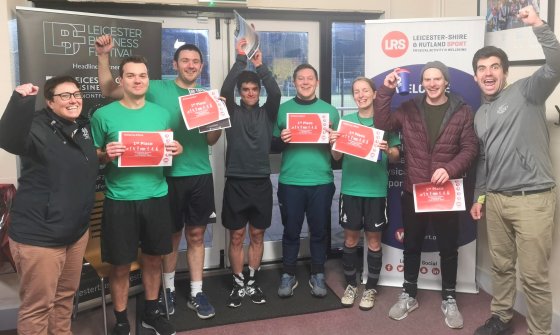 On a Thursday 31st October, five teams descended on St Margaret's Sports Centre in a bid to battle it out for the coveted title of Workplace Hockey Champions!

The competitions ran in a round-robin format which meant that each of the teams could play as many heats as possible! With the clackson sounding the first round was underway!

Round two saw the turn of LRS to take to pitch one after sitting out of the first round. They faced Griffydam Primary, whilst Newby Castleman played the champions of the first round, Volleyball England! Both games presented some action-packed play, with strong tackles and flicks by both sides.

By round four it was clear that Volleyball England were the ones to beat with a 5-1 victory against Griffydam Primary School, though LRS were still in contention with a 2-0 defeat over Mellor Primary, and Newby Castleman were just able to cling on with 1-0 defeat against LRS. Would they be the underdogs and come back to take the win?

The first semi-final (Volleyball England V LRS) was a close call, with both sides clinging on, but in the final few minutes of the game Volleyball England saw an opportunity and scored. The second semi-final (Newby Castleman V Mellor Primary) was also a tough competition with both teams dribbling and defending their way towards victory, however it was Newby Castleman's efforts that gave them a 2-1 win!

After what was a successful evening with some brilliant play, great sportsmanship and some nail-biting action, it was time for the much-anticipated results! In first place were unsurprisingly, Volleyball England after their showstopping performance and in second place… the underdogs of the night Newby Castleman, and taking third was Mellor Primary, leaving LRS in a respectable 4th and Griffydam Primary School in 5th.

We would like to thank all the teams that took part and a special thanks goes to Leicester Hockey Club for hosting us and umpiring the matches. The club are currently looking for funding to upgrade their pitch, if you think you can help please visit: https://www.spacehive.com/switch-the-pitch