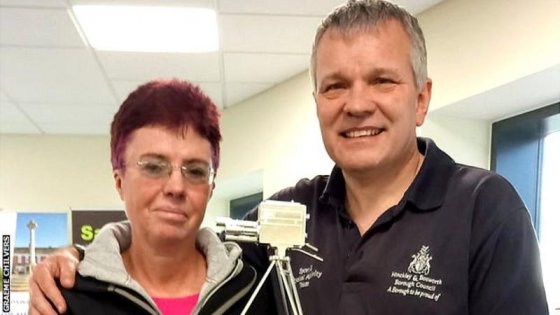 Denise Larrad has had quite a year since being named 2017 BBC Get Inspired Unsung Hero at the BBC Sports Personality of the Year show in Liverpool.

But it might have been a very different year - were it not for Graeme Chilvers. He's the man who nominated Denise in the first place.

"Denise had been on my radar," says Graeme, who works as Health & Recreation manager for Hinckley & Bosworth Borough Council in Leicestershire. "We knew her since before 2012. We worked with her about carrying the Olympic torch. She really puts herself out. You can see the difference she makes. "Everybody has something positive to say about her."

The 'lifeblood' of sport

It was the variety of groups that Denise runs and helps with that impressed Graeme (and ultimately the judges) about her so much - something he'd had a hand in as well.

"I'm a 'cascade trainer' for Walking for Health," says Graeme, who has himself always been involved in sports coaching. "I trained Denise up to be a walk leader."

And Graeme is passionate about the importance of sport and fitness for everyone.

"You see the impact, especially with young people and their education," he says. "Teachers say young people involved in sport have a better attitude to life. They focus more and work their way through problems and get success."

There are 136 sports clubs that Graeme works with for the council, and he knows those would not run were it not for people like Denise. "Volunteers are the heartbeat and lifeblood of sport in this country," he adds. "It's nice to highlight the difference they make." Graeme is also keen to emphasise the importance of younger volunteers as well. "Young coaches are absolutely amazing," he says. "We always look for, encourage and engage with young volunteers. There are lots of roles to do."

Continuing to carry the message

"Our winners just don't just win - they go on to do even more," adds Graeme.

Sue & Jim Houghton, who won in 2012 (after being nominated by Graeme), helped to build the Sport in Desford leisure centre, which this year won the Disability Programme of the Year at the British Tennis Awards. The impetus is something Denise already acknowledges. "Winning the award has given me confidence in what I am doing and made me realise that I am making a real difference," she says.

As for his role in highlighting Denise and the others he has nominated in the past? "It's not me. I just tell the story," adds Graeme. "We work closely with everyone, so we know their story. They're the superstars - I'm just lucky to be the storyteller." So Graeme would urge you to nominate someone for the award.

"Sport in this country wouldn't happen without these volunteers," he says. "It's a fantastic way to acknowledge and thank them for the work they do."

Find out how to nominate someone for the 2018 BBC Unsung Hero award here.