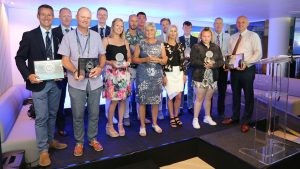 It's still only the opening week of Wimbledon but the first trophies have already been handed out, with Desford Lawn Tennis Club today recognised as having the leading disability tennis programme in the country at a special British Tennis Awards ceremony.

Today's event marked the third year of the British Tennis Awards, which celebrate the players, volunteers, coaches, clubs, schools, parks and communities who deliver British Tennis. A record 1,460 public nominations were made across 10 categories, plus four player awards judged by the LTA Performance Team.

Among the national winners receiving their awards at the event, held at the All England Lawn Tennis Club, were Desford Lawn Tennis Club. The Leicestershire club was named as having the Disability Programme of the Year and today their Head Coach, Alec Matty, was presented with their award before enjoying a day of tennis at The Championships with all the other winners.

Alec was delighted to be at Wimbledon for the day, saying after collecting the award "It's a very humbling experience for me. I remember queuing up on half a dozen occasions to watch, so to be on this side of the gates is something that I've got to try and take in whilst I can."

Disability tennis is thriving in Great Britain, led by clubs like Desford Lawn Tennis Club. The club exemplifies how having a welcoming approach and providing accessible opportunities for people with a disability to play, volunteer or work in tennis, can help to open up the sport. As part of the growing network of venues providing disability tennis opportunities that are supported by the Tennis Foundation, the club really is a fantastic example of how tennis can be a sport that is inclusive and accessible to all and they thoroughly deserve this acknowledgement.

Reflecting on winning the award, Alec said "It was very unexpected. We were up against a lot of bigger and more prestigious clubs who have had their foot in this area of tennis for a long time so it was a bolt out of the blue for us.

"Disability tennis means a lot to me because I run a lot of sessions in this area and it is something that often gets overlooked. I've always treated all players exactly the same whether they have a disability or not and I think that's something that will have helped us gain this national recognition."

Desford offers an extensive range of sessions for all ages, abilities and backgrounds, with sessions supported through strong connections with local businesses and members volunteering. These volunteers epitomise dedication and commitment, ensuring all players have positive experiences at the club. It is that inclusive approach which has led to a significant increase in new members across all sessions within the last 12 months.

Specific sessions include a group for older players with hearing and visual impairment, those with new hips and knees, a group for those with learning disabilities, tournaments for players on the autism spectrum from local schools, and a group for players and their families who are affected by cancer.

The club is celebrating its 10 year anniversary this Sunday and Graeme Chilvers, Health and Recreation Manager at Hinckley and Bosworth Borough Council, explained how they will continue to endeavour to achieve more over the next few years.

Desford Lawn Tennis Club want to make a difference to people lives through making tennis accessible to anyone who wants to play it. They do this by working in partnership with Hinckley and Bosworth Borough Council and the Borough Sport and Health Alliance by designing and running programmes that target and support people who may feel tennis is not for them. These players quickly see that tennis is not only great fun but improves player's health, wellbeing and fitness and also provides a social group who support one another and they quickly feel part of the club.

"Winning this award shows us that we have a programme which is achieving our aims and is highly thought of by the LTA. However, this does not mean we have achieved our aims and can rest on our laurels. Winning this award inspires us to keep moving forward and get more people playing tennis more often at Desford and keep on changing lives." 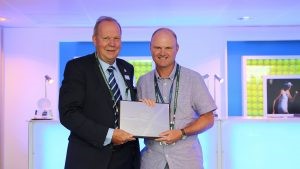