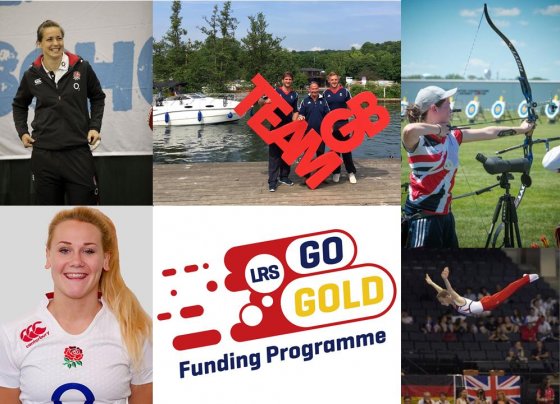 The aim of GO GOLD is to support local talented athletes who are being recognised by their National Governing Bodies of Sport as being our future Olympic, Paralympic, Special Olympic and Commonwealth Games participants.

Podium level funding is provided by Leicestershire County Council, Leicester City Council and Rutland County Council to those athletes who are competing at Regional level or higher.

In 2016, 109 athletes from 25 different sports were successful in receiving grants ranging from £100-£1,000 to support their development.

The athletes spoke to LRS on their selection news ahead of the Games which get underway Friday 5th August:

England World Cup winner Emily was at the heart of the England Rugby team as they went on to lift the Women's World Cup in 2014.

Emily said: "I am extremely honoured and excited to have been selected as part of Team GB for the Rio Olympics! It's fantastic that rugby is now a part of the Olympics and we hope that we can showcase it to a whole new audience out in Rio.

I was extremely fortunate to have been helped during my development by Leicester-Shire & Rutland Sport through their GO GOLD Funding Programme. They provided valuable funds that enabled me to use the best training facilities and equipment to continue to push on and improve".

Jonny has represented the GB Rowing Team at junior and U23 level and has firmly established himself in the men's sculling squad during this Olympiad and raced with John Collins in the men's double during the past two seasons.

Jonny said: "These Olympics are going to be special; rowing on the Lagoa below Christ the Redeemer in Rio is going to be amazing! We have some tough camps to go and our last race next weekend in Poznan, Poland for World Cup III.

The support LRS' GO GOLD Funding Programme gave to me was invaluable in my development as an athlete giving me access to things to help me train race and perform and may not have been able to afford".

Megan said: "I am excited to be travelling to the Games especially with the emphasis on 7s Rugby making a dramatic return! I could not have done it without the support around me and GO GOLD. I look forward to making history and creating better memories! GB 7s team will definitely be remembered."

The British Olympic Association have launched its Ambition Programme for Rio 2016 with young athletes such as Lizzie and Andrew getting the chance to experience the Olympic environment with Summer, in preparation for Tokyo 2020.

Lizzie said: "I'm going to Rio! Archery GB is only sending one man and one woman so it's a great honour. I've already been to The NEC to collect my kit and attend workshops and talks in preparation for the visit. I leave on August 5thand spend 5 days there".

Andrew said: "I am so lucky to have been chosen to be part of the Olympic Ambitions Programme. I met several Olympians at the launch programme earlier this month. I am really looking forward to it and am totally inspired. I can't wait!"

Councillor Ernie White, Leicestershire County Council's cabinet member for health, said: "Competing in an Olympics will be the pinnacle of sporting achievement for these athletes and we're delighted that the GO GOLD funding helped them at the start of their journey to Rio."